How We Almost Sank A Client’s Business

Something interesting happened with a client of mine. Let me tell you the story…

My client hired an SEO. The SEO – a top guy, very smart – suggested we change the bullets on my client’s sales page… 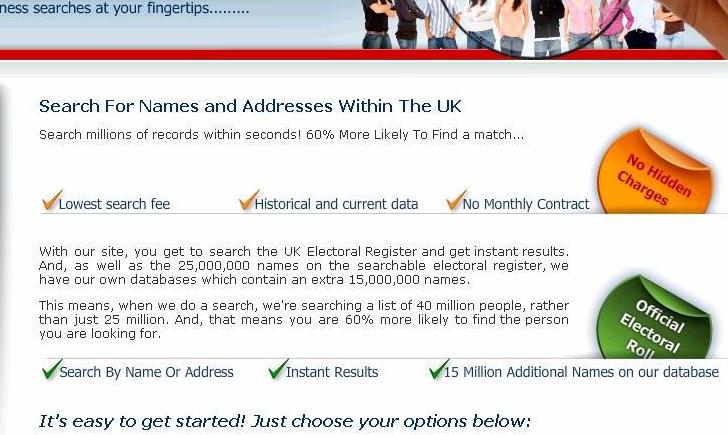 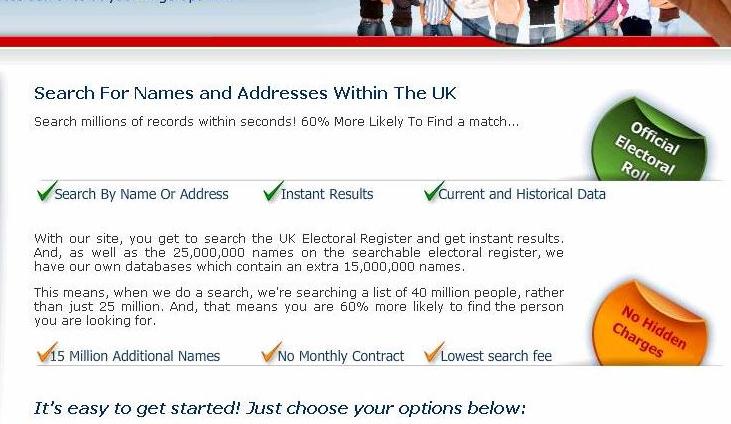 (The only changes were those graphic bullets – everything else on the page stayed the same.)

It seemed a reasonable suggestion. The SEO – as I said, a smart guy – thought it would increase conversion. The client thought so, too. And so did I.

However, to make sure we were right, I suggested we test the SEO’s version against the old version. After all, why guess when you can know?

The test ran from the 16th February to the 24th.

Here is the result…

We Were All Wrong!

Here is a screenshot of the result: 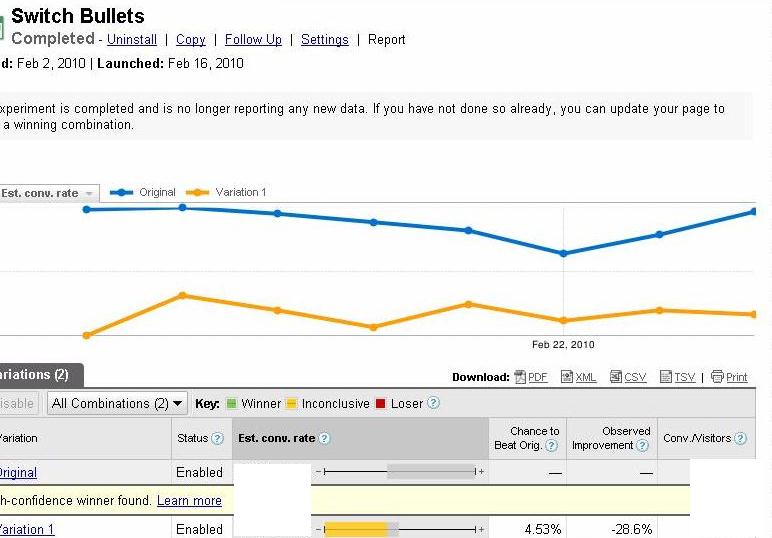 As you can see, the “new and improved” version turned out to be 28.6% worse. (With 95.57% statistical confidence that the original was the winner.)

Just as well we tested!

Why was it worse? I can’t say for sure, but I have a theory: the first version led with benefits, the second led with features. Copywriters know that benefits usually out-perform features, so that might have been it.

Or it might have been some totally different reason. I have no idea. That’s why I split-test.

What We Can Learn From This

Here are the points I want to make:

(A) A small change to the page made a huge difference to the conversion rate.

(B) We all thought the loser would win. Guessing doesn’t work.

(C) We only knew version B performed poorly because we had version A.

If the original version of our site had had version B and we’d never done any testing, we’d never have known what was possible for our site.

Instead, we would have struggled along with only 71.4% of the sales, ignorant of what could have been.

And it gets worse…

And It Gets Even Worse…

Think about how many things on your site are based on “opinion” – headlines, body copy, images, layouts, colour schemes… on every single page.

Add them all up and you probably have 50 or 100 different elements that could be under-performing. And it’s almost inevitable, considering the test result above, that there will be at least 3 things that are each reducing conversion by 20% or more.

Think about that: you could be banking £100,000 but, instead, you’re barely breaking even.

Right now, you’re probably thinking one of two things. You’re either thinking, “This is all a pack of lies, a mathematical illusion,” or you’re thinking, “Holey moley! How much money am I letting slip away?“.

(Except you’re probably not using the words “holey moley”.)

If you’re in the first group, I’ll save you some time and tell you the rest of this article isn’t for you.

However, if you’re in that second group, I want to make you a proposition.

Before I do that, let me point out something…

In fact, I usually win. Let me give you links to some screenshots of a few of my winners…

This client of mine enjoyed 28.9% growth from a single test.

Want another? Take a look at this screenshot of a test that produced a 34.5% increase in sales.

And another test where I produced a 17.4% increase in conversion.

As you can see, I’m not beating rubbish pages that aren’t converting. Some of these pages were already doing very well – yet I beat them by a big margin. That’s the power of split-testing… split-testing plus copywriting plus marketing know-how.

(Note: These aren’t the best results, just the one’s I have screenshots for. I’ve helped clients increase conversion by up to 481% – see the testimonials page for information about some of those.)

“Almost any question can be answered, cheaply, quickly and finally, by a test campaign. And that’s the way to answer them – not by arguments around a table. Go to the court of last resort – the buyers of your product.”

That’s what split-testing does. It’s a “forced survey” that asks your prospects which version of a page they’d respond to.

– You show half your visitors one version of a page and count the number of sales.

– At the same time, you show the other half of your visitors an alternate version of that page… and count the number of sales.

You keep doing that until one version is a proven winner – i.e. it’s proven to convert better than the other.

Then you keep the winner and dump the loser.

It’s as simple as that.

Why I’m Looking For Three Businesses

Over the next 12 months, I’m looking to work with 3 businesses to double their conversion rates with split-testing.

Why This Is Do-Able

Reason #1: If we run a split-test each month for 12 months, and only win half of these tests, we can get a 100% increase in conversion if we average just 12% improvement per winner. (Because the wins multiply like compound interest.)

Reason #2: There’s an advanced testing approach that quickly identifies the factors on your page that (a) have the biggest impact on conversion, and (b) are most open to improvement.

This speeds up the testing process, improves the odds of winning each test and also improves the size of the winners.

Reason #3: My copywriting and split-testing experience allows me to spot likely weaknesses in your sales message, layout and usability. Again, focusing our tests where they’re most likely to be profitable.

Reason #4: For the last few years, I’ve been following other people’s test results. I’ve seen what they’ve tested and what results they’ve gotten. I’ve already used some of their ideas to get big winners for my clients. I can do the same for you.

What’s This Going To Cost?

If I can double your sales, I deserve to keep some of that extra profit. Right?

After all, if I were an affiliate or a salesman, I’d get a commission for the sales I produce. Why should a marketer be lower on the food chain than those people?

So how about this for a fair deal: as long as I can increase your conversion rate by 25% or more, I get to keep 20% of the profits from the extra sales.

Apart from that, all I ask is for a small up-front “goodwill” payment, to prove you’re serious. However this payment is 100% refundable if I don’t increase your conversion by at least 25%.

Not Everyone Is Eligible

Because I want to focus so much effort in helping just 3 businesses – and because I have also a PPC consultancy business to run – there are certain criteria you have to meet to qualify for this:

#2: Most or all of your conversions need to happen online. We have to be able to track conversions to the version of the page that produced them. That means we need them to happen online (or enough of them to get a trustworthy result). So, if you get your enquiries by phone, this isn’t for you.

So I’m going to limit this to businesses that have at least 100 online conversions a month.

#4: You need to believe in split-testing. This is a scientific process. It’s used by big companies like Amazon, Google, Dell, Sony and Vodafone. If you believe in this, you’re going to be motivated. And that’ll make it easier for us to work together.

#5: You need to be honest. If I achieve what I’m setting out to do, you’re going to be sending me money for a long time.

I need you to be cool about this. Every time you send me a cheque for £1,000, I need you to remember that you get to keep £4,000 that you wouldn’t have otherwise made.

Some people can’t do that. They think, “Why should I keep sending him money? He hasn’t done any work this month.”

If you think you might feel that way, please don’t respond to this offer.

In this article, I’ve proven to you how small changes to your website can make a huge difference to your conversion rate…

I’ve shown you how three people – all of them experienced online – all guessed wrongly. Split-testing is the only way to reliably increase conversion…

I’ve offered to help you double your conversion rate…

I’ve removed the risk by offering to work for just a percentage of the increased profits and a small, refundable up-front fee…

Now the decision is completely in your hands.

Only one of two things can happen now. Either we’ll go on from here together, or you’ll go it alone.

Either you’ll work with me and begin the process of doubling your conversion rate, or you’ll continue to settle for the lower conversion rates, lower sales and lower profits you’re getting now.

I wish I could take the next step for you. I can’t; it’s completely up to you.

I urge you: I’m only going to work with three businesses. Those businesses will be taking up most of my time over the next year. That means, if you’re not amongst those three, then expect this offer to be closed for at least 12 months.

So, if this offer interests you, don’t wait. Email me at steve@stevegibsonconsulting.co.uk with the subject line “split test” and we’ll take it from there.

P.S. A couple of points about the split-test result I showed you at the beginning of this article. Firstly, I’m not knocking the SEO guy for his idea. It was a reasonable idea and well worth testing.

Secondly, due to confidentiality, I can’t usually share the specifics of split-tests I do for clients. I had to get down on bended knee to ask the client if I could share these screenshots.